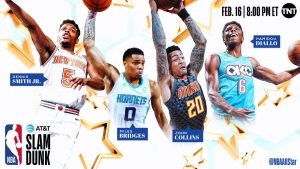 Dennis Smith Jr. has proven he is one of the NBA’s elite dunkers time and time again, both in-game and out. He is the only participant this year to have dunk contest experience, which might give him a slight edge. He took part last year as a rookie, but failed to make it past the first round. After being shipped to New York in the blockbuster trade that sent Kristaps Porzingis to Dallas, it appears Smith has found a new home. He scored a career-high 31 points against the Pistons, and showed that he is ready for the contest in the same game…

Miles Bridges is one of two rookies to participate in the contest this year. Although he has only played in limited minutes this season, he has shown flashes of high-level talent and athleticism. Bridges, who has been dunking since he was in 7th grade, believes that the hometown crowd will have a positive effect, “I definitely feel like I have an advantage. There will be a lot of fans there – a lot of support. I’m used to the rim so that’ll be good.” According to Bovada, he comes into the contest with the second best odds of taking home the crown.

We talked with Bridges about what it means to be a part of NBA All-Star Weekend in CLT & more. Interview coming up at 5:30!#NBAAllStar | @MilesBridges | #Hornets30 pic.twitter.com/x67AhBglUL

Although Diallo was just assigned to the Oklahoma City Blue, the Thunder’s G-League affiliate, he will still take his high-flying ability to Charlotte for the dunk contest. A rookie out of Kentucky, the 6′ 5″ shooting guard has averaged just over four points and two rebounds per game. Diallo told NewsOK that he knows he can’t go the traditional route when it comes to his dunks, “The dunks they used to do then are not in style anymore. People have seen those kinds of dunks in games and stuff like that, so you can’t really bring that to a contest. So you’ve got to be really creative and really use the internet to your advantage.” He will be the first participant from the Thunder since Serge Ibaka in 2011.

P.S. The highlights of his dunk contest against Zion Williamson from 2016 are astounding, so I highly recommend looking those up.

In his sophomore season, Collins has proven that he is going to be a centerpiece for the Hawks franchise moving forward. He is averaging 19 points and 10 rebounds in only 30 minutes of play per game. Outside of Blake Griffin and Dwight Howard, big men have not seen much success as of late in the dunk contest. At 6-10, it is unlikely he takes home the win, mainly because the majority of his dunks are on people. Not to undermine his dunking ability or raw talent, but athleticism and agility is what wins the dunk contest, and it will be hard for him to top his competitors.

HBD John Collins!
We need to see @jcollins20_ in the NBA Dunk Contest.

Watch all the videos from the official site NBA.com

Watch all the videos from the official site NBA.com